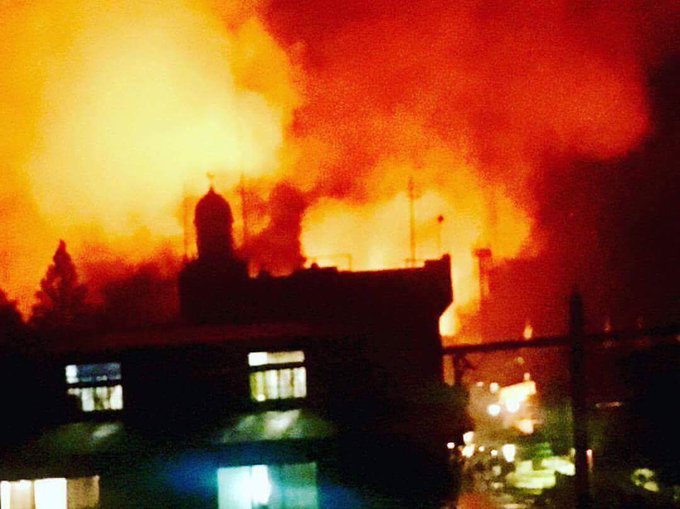 (World Watch Monitor) UPDATE (25 May): Nine Christian civilians were reportedly shot dead at a militant-run checkpoint in the besieged city of Marawi in the southern Philippines on Tuesday (23 May).

Filipino news site GMA News Online – one of the biggest news and public affairs networks in the country – reported that local residents identified the nine as Christians, saying they had been pulled from a truck, had their hands bound and then their bodies riddled with bullets and left in a field.

This latest update comes as a Catholic priest and 13 other Christians are still reportedly being held by the Islamists, who have laid siege to the city, setting fire to buildings including a cathedral and Protestant-run college, and erecting the black flags of ISIS.

Reuters reports that the militants have been using the hostages as human shields, and have contacted cardinals, threatening to execute them unless government troops withdraw.

The governor of the Mindanao region, where Marawi is situated, said the rebels are from three extremist groups – Maute, Abu Sayyaf and the Bangsamoro Islamic Freedom Fighters.

Philippines President Rodrigo Duterte vowed to crush them, saying: “Anyone now holding a gun, confronting government with violence, my orders are spare no-one, let us solve the problems of Mindanao once and for all.

He added: “I made a projection, not a prediction, that one of these days the hardest things to deal with would be the arrival of ISIS. The government must put an end to this. I cannot gamble with ISIS because they are everywhere.”

Chaos in the Philippines as Islamist group storms city, abducts Christians and sets church on fire

A Catholic priest and 13 other Christians were taken hostage, while a cathedral and Protestant-run college were among the buildings set on fire, when an extremist group which has pledged allegiance to the Islamic State descended upon the city of Marawi in the southern Philippines yesterday (23 May).

Three fires broke out, as around 100 armed members of the Maute group fired off their weapons, beheaded a police chief and erected the black flags of ISIS.

It seems #ISIS has taken over #Philippines city #Marawi and are burning down offices, schools, jails. Is there still a doubt we are at war?

The abducted priest was identified as Fr. Teresito Suganob, vicar-general of the prelature of Marawi, by a local bishop, Edwin De la Peña, who told the Catholic news agency Fides: “Today is the feast of our Prelature, the feast of ‘Mary, help of Christians’. The faithful were in church to pray on the last day of the novena. The terrorists broke into St Mary’s Cathedral, took the hostages and led them to an unknown location. They entered the bishop’s residence and kidnapped [Fr. Suganob]. Then they set fire to the cathedral and the bishop’s residence. Everything is destroyed. We are dismayed.

“The terrorists have occupied the city. People are terrified and locked in the house. We are waiting for the army’s reaction. The important thing is to regain the city with the least possible bloodshed. Hostages have not been mentioned. We have activated our channels, the Church and Islamic leaders, and we hope to be able to negotiate soon so they are released safe and sound.

“…We also appeal to Pope Francis to pray for us and to ask the terrorists to release the hostages in the name of our common humanity. Violence and hatred lead only to destruction: we ask the faithful all over the world to pray together with us for peace.”

Archbishop Socrates Villegas, president of the Catholic Bishops’ Conference in the Philippines, added that Fr. Suganob was “not a combatant. He was not bearing arms. He was a threat to none. His capture and that of his companions violates every norm of civilised conflict.”

Meanwhile, three of the buildings belonging to Dansalan College, which was established by the Protestant United Church of Christ, were burnt down yesterday. On its website, the college says it espouses the importance of interfaith relationship, as 95% of its students are Muslim, while 80% of its staff are Christian.

Reports say a hospital, the city’s jail, and several other establishments were also taken over by the gunmen.

PHILIPPINES: Some houses being set on fire by #ISIS . People don’t know where to go. They are stuck in #Marawi

Philippines President Rodrigo Duterte has reacted by cutting short a visit to Russia and imposing 60 days of martial law across the Mindanao region, where Marawi is situated. The 27 provinces and 33 cities in Mindanao make up roughly a third of the whole country.

Martial law gives more power to the military, including its ability to detain people for long periods without charge.

It is only the second time martial law has been imposed in the Philippines since the fall of former president Ferdinand Marcos in 1986.

Human rights groups and religious leaders criticised the president’s decision, calling it “uncalled for” and warning that it would “inevitably result in intensified military operations, including aerial strikes, which can kill and affect hundreds of civilians”.

Sixty days is the maximum period allowed for martial law under the Philippines’ Constitution, but President Duterte said in a video released by the government that “if it would take a year to [overcome the insurgents], then we’ll do it”.

After his return home today (24 May), Mr. Duterte said at a press briefing: “If I think that the ISIS has already taken foothold also in Luzon, and terrorism is not really far behind, I might declare martial law throughout the country to protect the people.”

Although the Philippines is a majority-Christian country, the region of Mindanao has a strong Muslim presence and is home to the Maute group, which stems from a violent Islamist movement called the Moro National Liberation Front, which sought independence for decades, hoping to create an independent Islamic state.

“On the ground, the people are asking for prayers,” a local source told World Watch Monitor. “The residents are threatened. They say homes are being trespassed, and that women not in hijabs are being taken away. The black flags are perched on top of a police car and a hospital. Social media screams with pleas for help, screenshots of texts of relatives on lockdown. One post says people must recite the shahada [Islamic profession of faith] when asked, else be killed.

“The fighting is said to spring from a hunt for Isnilon Hapilon, local Abu Sayaff leader tagged as the head of ISIS in the Philippines. Hapilon has not been caught.

“The military says things are in control now, and denies that ISIS was involved, saying the local Maute group was wreaking havoc only to get foreign attention.”