SYRIA – “In Sadad, The largest Massacre Of Christians In Syria” 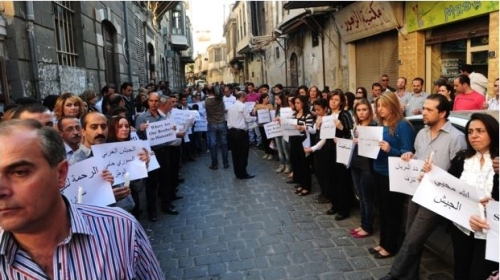 People in Damascus show solidarity with the Syrian army and residents of the Christian town of Sadad during a candlelight sit-in in front of the Syriac Orthodox Cathedral of St. Georges on Saturday.(SANA/Reuters)

OCTOBER 31, 2013 – Sadad (Agenzia Fides) – “What happened in Sadad is the most serious and biggest massacre of Christians in Syria in the past two years and a half”: this was stressed by Archbishop Selwanos Boutros Alnemeh, Syriac Orthodox Metropolitan of Homs and Hama, in illustrating to Fides the tragic death toll in the Christian town of Sadad, invaded by Islamist militias a week ago and then re-conquered by the Syrian army.

“45 innocent civilians were martyred for no reason, and among them several women and children, many thrown into mass graves. Other civilians were threatened and terrorized. 30 were wounded and 10 are still missing. For one week, 1,500 families were held as hostages and human shields. Among them children, the elderly, the young, men and women. Some of them fled on foot travelling 8 km from Sadad to Al-Hafer to find refuge. About 2,500 families fled from Sadad, taking only their clothes, due to the irruption of armed groups and today they are refugees scattered between Damascus, Homs, Fayrouza, Zaydal, Maskane, and Al-Fhayle”.

The archbishop continues showing all his bitterness: “There is no electricity, water and telephone in the city. All the houses of Sadad were robbed and property looted. The churches are damaged and desecrated, deprived of old books and precious furniture. Schools, government buildings, municipal buildings have been destroyed, along with the post office, the hospital and the clinic”.

“What happened in Sadad – he says – is the largest massacre of Christians in Syria and the second in the Middle East, after the one in the Church of Our Lady of Salvation in Iraq, in 2010″.

“We have shouted aid to the world but no one has listened to us. Where is the Christian conscience? Where is human consciousness? Where are my brothers? I think of all those who are suffering today in mourning and discomfort: We ask everyone to pray for us”.