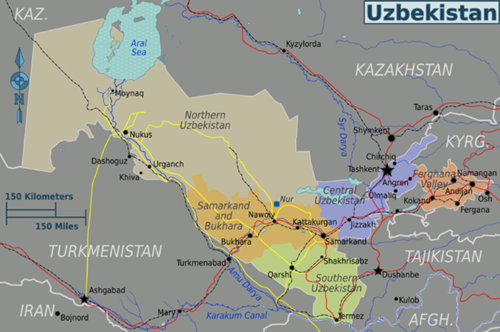 There are only 349,000 Christians in Uzbekistan – a tiny minority in a country of 32.8 million people. They make up just 1.1 per cent of the total population, the majority of whom are Muslims. No religious activities beyond state-run and state-controlled institutions are allowed. Under the authoritarian rule of the president, the government heavily restricts religious expression, outlawing all unsanctioned religious expression. This means any non-Orthodox Christian group is illegal—and even Orthodox groups can preach only in Russian since doing so in Uzbek is against the law.

Christians are viewed as a threat to the government, and Protestants in particular are frequently branded as ‘extremists’ because they practice their faith outside state-sanctioned structures. They are seen as followers of an alien sect that aims to destroy the current political system. For this reason, the state believes they need to be not only controlled, but if necessary, eradicated.

The general Islamic culture makes life for converts to Christianity particularly difficult. The Islamic culture in Uzbekistan means believers from Muslim backgrounds bear the brunt of the persecution; they experience pressure and occasionally physical violence from their families and communities to force them to return to their former faith.

Example: Pastor Oleg leads a church in Uzbekistan that is mainly made up of believers from Muslim backgrounds. He says, “We try to be very careful – we don’t meet in groups of more than three or four. We can see that the persecution is growing day by day and we are learning to live in the midst of it… Sometimes I feel so tired of all this pressure. As a Christian pastor in a Muslim country, I feel even more pressure than others. That’s because of responsibility for myself, for my family (my wife and three children) and also the responsibility for the members of my church. Sometimes this burden seems too heavy.”

Again, we want to lift up persecuted witnesses for the Lord and pray for Leah Sharibu and Alice, pray that they will be set free. And also lift up pastor Wang Yi to be released from Prison and ask for the release for Anita, a Christian convert recently sentenced to 6 years in prison for sharing the Gospel in Iran

You are invited to join us on Thursday, July 16 in a prayer call for the persecuted church.

What is Persecution Watch?
Persecution Watch is a U.S. national prayer conference call ministry that prays specifically for the global Persecuted Church. For over a decade, Blaine Scogin led this national network of believers who faithfully pray for the persecuted and the global harvest for the Kingdom of God.

The group meets via a free call-in service every Tuesday, Thursday and Saturday night at 9pm Eastern (please check your time zone). Blaine also served as Prayer Director for Voice of the Persecuted and our missions became one. The prayer mission of Persecution Watch is an important part of our own.

With the passing of Blaine into glory on December 26, 2019, Voice of the Persecuted is committed to continue the prayer conference call for the persecuted along with our dedicated prayer warrior team.

On occasion, persecuted brothers and sisters have been invited on the call to share the trials they’re facing. The team serves to encourage them by washing their feet in Spirit led prayer.

Time is often reserved for those on the call to ask questions. We believe this helps to gain a better understanding of the situation that persecuted Christians endure in their specific nations. Q&A also helps us to focus our prayers based on their current needs.

Persecution Watch also hosts callers who want to pray united from other nations. If your heart is perplexed by the sufferings of our persecuted brothers and sisters, you no longer need to pray alone. We welcome all who desire to pray for the persecuted church and consider it a joy to pray together with you.

If you’re new to the call and can’t find your voice, listen in and pray silently or on mute. We are grateful and thank the Lord for bringing us all together to pray in agreement for our persecuted family in Christ. We can all be prayer warriors on this call!

NOTE: Persecution Watch has a new email address for the prayer team and those who would like to receive urgent prayer requests, weekly call prayer points and notification of special prayer events and special guest speakers.

Please fill out the form below to be included in our new distribution list to receive this important information. We are grateful for your prayers and to the Lord for guiding us as we continue the Persecution Watch prayer call mission.