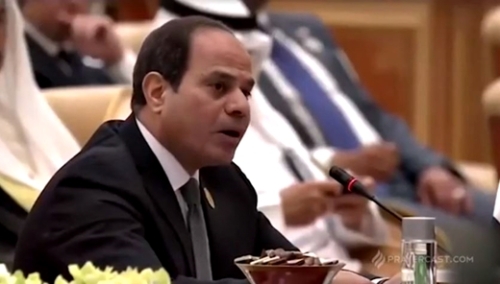 WHO IS PRESIDENT EL-SISI?

As defense minister and head of the army, el-Sisi responded to the Egyptian people’s request and removed President Mohamad Morsi from power and dissolved the discredited Muslim Brotherhood government on July 3rd, 2013.

El-Sisi was raised in Old Cairo in a religious family from Upper Egypt. They lived in a neighborhood close to al-Azhar mosque that contained Jews, Muslims, and Christians. El-Sisi and his wife, Entissar Amer (his cousin), have three sons and one daughter. El-Sisi is known to be quiet, someone who listens, and one who frequently quotes the Quran.

El-Sisi joined the army and steadily worked his way up, doing training stints with both the British and American military. He became director of military intelligence and a member of the Supreme Council of the Armed Forces, which ruled Egypt from the resignation of President Mubarak in February 2011 until the inauguration of the Muslim Brotherhood-run government on June 30, 2012.

In August 2012, in a move seen as decreasing the power of the army, President Morsi gave el-Sisi the rank of Colonel General and appointed him Defense Minister, seemingly because el-Sisi was a devout Muslim sympathetic to Brotherhood aims.

President el-Sisi’s approach to governing Egypt has become increasingly controversial. Having never been a politician, he has been running the country almost by himself. He views the Muslim Brotherhood as violent terrorists and serious threats to Egypt’s security. In his ongoing efforts to “destroy” them, el-Sisi has become authoritarian.

The army appears to act with impunity and has killed and arrested far more people in the last few years than it had under former President Mubarak. El-Sisi has cracked down on the press, silenced political opposition, and leads without a political party. The 2018 election was widely viewed as a sham after el-Sisi jailed all but one of the opposition candidates.

At the same time, el-Sisi is friendly toward Christians, has rebuilt many churches destroyed by the army and the Muslim Brotherhood, and publicly affirms Christians as Egyptian citizens who have vital ongoing contributions to make to the future of Egypt.

We continue to pray for the persecuted:

“Our prayers do have an impact on the things of eternity and the souls of men and women to find truth in him who is the Living Word. Please join us on the prayer conference call to lift prayers up together. As ever, I remain your brother and prayer partner in our Lord Jesus. Meet you on the call! If you are unable to participate on the call, or cannot join us on a particular evening, you can still use the prayer points and pray in your personal prayer closet. The only thing I would urge you is, please do it.  Whether you pray privately, in a group, or on our call, please pray for a great harvest of souls during this time of Ramadan.” – Blaine Scogin, Founder of Persecution Watch and former Prayer Director of Voice of the Persecuted.

As Blaine Scogin did each year, the team will continue to host nightly calls during Ramadan. We will be following along with the Prayercast Team’s platform in praying for Muslims for the next 30 days, which began on April 24. Please sign up here to receive the daily video and prayer points from Prayercast which we will cover on the nightly prayer conference calls. If you have yet to do so, it’s not to late. Dear brothers and sisters, we challenge you to join us on the conference call to pray with us during these 30 nights of prayer for the persecuted, the harvest, and for Muslims to come out of the dark, receive the truth and follow Jesus. In Christ, Voice of the Persecuted and the Persecution Watch Prayer Team Nightly call schedule through Ramadan  From any location on your phone Time: 9:00 PM Eastern 8:00 PM Central 7:00 PM Mountain 6:00 PM Pacific Call in number: 712 775-7035 Access Code: 281207# Recommended: For those who may be subject to added charges for conference calls. Please download the app, it’s free! MOBILE APP: Free Conference Call HD also provides a quick and easy way for you to dial into conference calls without having to remember the dial-in credentials. Save all of your conference call dial-in numbers and access codes using this free app. With the Free Conference Call HD you can instantly dial into a conference call via 3G/4G data network and or regular mobile carrier. Google Play link or App Store – iTunes What is Persecution Watch? Persecution Watch is a U.S. national prayer conference call ministry that prays specifically for the global Persecuted Church. For over a decade, Blaine Scogin led this national network of believers who faithfully pray for the persecuted and the global harvest for the Kingdom of God. The group meets via a free call-in service every Tuesday, Thursday and Saturday night at 9pm Eastern (please check your time zone). Blaine also served as Prayer Director for Voice of the Persecuted and our missions became one. The prayer mission of Persecution Watch is an important part of our own. With the passing of Blaine into glory on December 26, 2019, Voice of the Persecuted is committed to continue the prayer conference call for the persecuted along with our dedicated prayer warrior team. On occasion, persecuted brothers and sisters have been invited on the call to share the trials they’re facing. The team serves to encourage them by washing their feet in Spirit led prayer. Time is often reserved for those on the call to ask questions. We believe this helps to gain a better understanding of the situation that persecuted Christians endure in their specific nations. Q&A also helps us to focus our prayers based on their current needs. Persecution Watch also hosts callers who want to pray united from other nations. If your heart is perplexed by the sufferings of our persecuted brothers and sisters, you no longer need to pray alone. We welcome all who desire to pray for the persecuted church and consider it a joy to pray together with you. If you’re new to the call and can’t find your voice, listen in and pray silently or on mute. We are grateful and thank the Lord for bringing us all together to pray in agreement for our persecuted family in Christ. We can all be prayer warriors on this call! NOTE: Persecution Watch has a new email address for the prayer team and those who would like to receive urgent prayer requests, weekly call prayer points and notification of special prayer events and special guest speakers. Please fill out the form below to be included in our new distribution list to receive this important information. Since the passing of Brother Blaine Scogin, we thank you for your patience as we have transitioned into this new season. We are grateful for your prayers and to the Lord for guiding us as we continue the Persecution Watch prayer call mission. Note to Voice of the Persecuted (VOP) readers: The Persecution Watch prayer team is also the prayer team of Voice of the Persecuted. SIGN UP today.

By VOICE OF THE PERSECUTED in Christian News, Christian Persecution News, Faith, How To Pray, Persecution Watch Prayer Conference Call, Pray on on May 21, 2020.
← Ramadan Day 27: Praying for Muslims to come to Christ –King Salman Muslim Father in Uganda Burns Daughter for Becoming Christian →