Home » Against Christianity » China: Christians Forced to Choose Between State Benefits and Faith

China: Christians Forced to Choose Between State Benefits and Faith 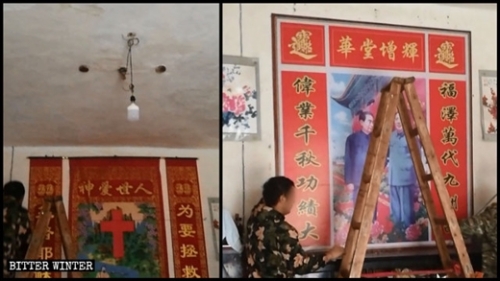 Portraits of Mao Zedong and Zhou Enlai were posted by officials in a believer’s home in Lu’an city.

Local officials throughout China are intimidating people of faith to renounce religion and start worshiping the Communist Party and its leaders, past and present. Officials warned them “not to praise Jesus but the Communist Party because it supports his livelihood.” “You must listen to the Party and follow it forever and ever.”

by Tang Zhe (Bitter Winter) Ever since President Xi Jinping took office, his portraits and quotes started invading places of worship and even believers’ homes, pushing his personality cult to unprecedented levels. People are also threatened to have their poverty alleviation and other government aid removed if they don’t replace religious symbols with portraits of Xi Jinping or Mao Zedong.  Bitter Winter continues to receive more such reports.

In Fenyi county of the southeastern province of Jiangxi, Caochang township officials came to the home of a Three-Self church member on December 27, 2019. They forced the believer of more than 30 years to replace two religion-themed pictures with a portrait of Xi Jinping.

Village officials visited the woman’s home several times to ensure that she doesn’t host religious meetings or read the Bible, threatening to revoke her subsistence allowance if she does.

In June, government officials tore down a picture with the cross from a wall in the home of a 60-year-old believer in Fenyi county’s Dongcun township. They threw it into a trash bin and posted portraits of Xi Jinping and other CCP leaders in its place.

“The government is imposing stricter and stricter control over religion. I’m afraid we won’t be able to attend Sunday service in our Three-Self church,” a local churchgoer said worriedly.

Believers in the eastern province of Shandong face similar suppression. On November 15, government officials raided a Three-Self meeting venue, spanning the history of more than 40 years, in Heze city-administered Shan county. They forced their way inside when no one was there and replaced a painting depicting Jesus and embroidery of the cross, displayed in the center of a wall in the hall, with a Xi Jinping portrait. The officials threw away the religious paintings and moved all the tables and chairs into the courtyard.

The next day, they returned to the venue again, threatening to demolish the building if the owner continued renting it to the church and ordered him “not to praise Jesus but the Communist Party because it supports his livelihood.” “You must listen to the Party and follow it forever and ever,” the officials warned before leaving.

In December, two more elderly believers in Shan county had paintings depicting Jesus replaced with images of Xi Jinping. Officials threatened one of the women to revoke her subsistence allowance if she continued believing in God. “You are allowed to worship Xi Jinping only,” the elderly believer was pressured.

“Believing in God is deemed a crime in China, where believers are restricted every day, as their rights and liberties are obstructed,” an elderly Christian from Shandong’s Penglai city, who was also threatened to lose her subsistence allowance, told Bitter Winter. “The CCP propagates the freedom of religion, but persecutes old women like me for their faith.”

In October 2019, a Sola Fide house church member for 26 years from Lu’an city in the central province of Anhui was ordered by a local official to take down a picture with Chinese characters for “God loves the world” she had at home. The woman refused and was warned that her poverty alleviation subsidy would be revoked if she continued resisting. She chose her faith over money, but the officials still took down the picture, saying that she could not keep it even if she gave up the subsidy because “this is the Party’s policy.” He then forcibly took down the picture, replacing it with portraits of Mao Zedong and Zhou Enlai, the first Premier of the People’s Republic of China. He took photos afterward, to send them to the higher-ups.

VOP NOTE: Please pray for Chinese Christians to remain faithful under pressure and endure the extreme government persecution against them.