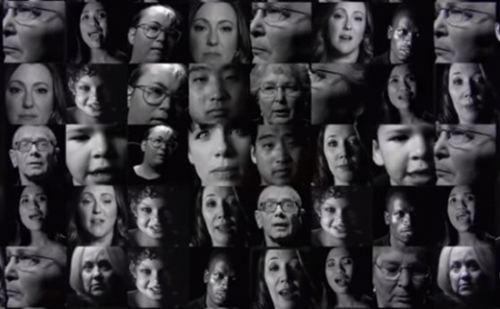 (Voice of the Persecuted) URGENT PRAYER and ACTION NEEDED: In 2014, I met Lyric Gillett who was only 23 at that time. I kept my eye on her because I knew the Lord had big plans for this special girl. A little over 2 years ago, I asked many to pray for this brilliant, young woman who has a heart bigger than Texas and the tenacity to take on any challenge and reach the goal. God’s plans for her, I didn’t know but was very excited to find out. While I followed and prayed for Lyric, I would often be reminded of Isaiah 6:8—Then I heard the voice of the Lord, saying, “Whom shall I send, and who will go for Us?” Then I said, “Here am I. Send me!” I asked the Lord to guide Lyric’s path, give her strength, gather strong believers to encourage her and to expand her territory. It comes as no surprise that God led her to form and launch Faces of Choice, a mission which deeply touches my heart.

On January 24, 2020, Lyric shared about this relevant new mission.

“The culmination of years of work — or rather, the birth and the beginning of it — will be unveiled on the main stage at the March for Life today, in Washington, D.C., in a matter of minutes, as a commercial and media campaign I’ve entitled Faces of Choice. God gave me this vision four years ago, and just like a baby in the womb, this idea has been vibrantly alive long before it will be “born” this afternoon. It has been a labor of love to get here, with an incredible team of people sent directly by God’s hand.

This campaign focuses on the survivors of abortion: literally, those who were aborted, and survived. Their voices will change everything…”

Lyric recently described the struggle that she and her media buyer had to get FOX to clear Faces of Choice’s 30 second spot for Super Bowl Sunday. She’s accusing the network of censoring her commercial.

“They gave [us] the run-around for six months, and we still haven’t received an answer. With the news that five more spots were made available for purchase, My Faith Votes has incredibly partnered with me to create a petition and email campaign for Faces of Choice, to ensure that these survivors’ voices are heard. “Choice is not merely a word. Choice has a face, and choice is a person. Their voices need to be heard, not silenced by the media’s agenda to ignore them into oblivion.”

Gillette told Faithwire, “The main goal [of the commercial] is for everyday Americans to actually see choice — to be able to look it in the eye. It is ironic and it is incensing to me that these survivors of abortion had their very voices almost stolen from them from the moment of conception, and now the media is doing that again.”

AGAIN, I ask that you pray for Lyric and the Faces of Choice mission. Please sign the petition here to support the effort for the commercial featuring abortion survivors to be aired during the Super Bowl. Stay up to date by subscribing to their email list. You can also follow them on Facebook here. Share and ask all your family and friends to also get involved, then follow up. It has long been said that it takes a village to raise a child. Now, in this present age, I say it takes a village to save them. Thank you in advance.

God bless you all,

Founder, Voice of the Persecuted

You may be wondering why we are sharing about Faces of Choice when our mission is to cover, care for and be a voice for the persecuted Church. Our Founder is also a voice for at-risk babies in the womb. She has taken part in and endorses campaigns to save them and their right to life. From time to time you will see us raise our voice for the protection of these incredibly vulnerable children who cannot speak for themselves. We ask that you too will consider standing up for these little ones and keep them in your prayers.