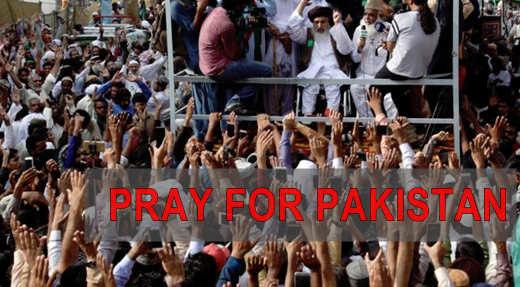 (Voice of the Persecuted) On Wednesday, protests by the radical group Tehreek-e-Labbaik Pakistan (TLP) against the acquittal of the blasphemy sentence against Asia Bibi has paralyzed daily life in various cities throughout the country. Major cities such as Lahore, Islamabad, Karachi, Peshawar, among others have all been affected. Protesters have forced people to close schools, shops and businesses. They blocked roads causing massive traffic jams, even flights have been delayed as passengers are finding it difficult to reach airports. The Punjab Safe Cities Authority reported protests were being carried out at 25 different locations, effectively blocking roads with intent to shut down traffic across the city. Security is also heightened in areas populated by Christians and for churches as well.

The TLP is now calling for the murder of the Supreme Court judges, mutiny within Army against General Qamar Bajwa, an Ahmadi, and an end to Imran Khan’s government.The government sent the Minister for Religious Affairs and Interfaith Harmony, Noorul Haq Qadri and Minister for National Food Security and Research, Sahibzada Muhammad Mehboob Sultan to Lahore for the purpose of negotiating with Khadim Rizvi to end his protest.

Pray for the courage and safety of our Pakistani brothers and sisters. For the sake of all, that peace prevails in the country.

We ask that you also pray for those who persecute us, They do not know the Lord and the amazing love He’s offering them. Pray their chains will be broken, for revelation, repentance, that they will be found in Christ to receive the gift of salvation. In the holy name of Jesus Christ, let us pray.

As we rejoice and give thanks to the Lord with our sister, let us pray for her as she adjusts to life united with her family in a new country. We also would like to recognize the Catholic charity, Aid to the Church in Need, (ACN) grateful for the support they are and have given her family throughout their suffering. Asia and her family are members of the Catholic church.

Quote from the video below: “We have a great God and He answers prayers.”