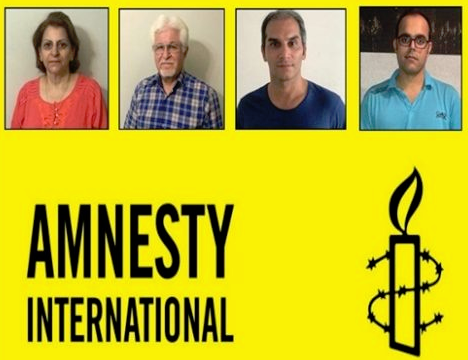 Mohabat news_ On August 23, 2018, Amnesty International issued an appeal for urgent action to quash the sentences of the pastor “Victor Bet Tamraz” and his wife “Shamiram Isavi” and the Christian convert “Amin Afshar Naderi” and “Hadi Asghari”.

In the Amnesty International’s appeal, it was stressed that these sentences were issued only due to the peaceful exercise of their rights to freedoms of religion and belief, expression, and association, through their Christian faith.

Victor Bet-Tamraz, his wife Shamiram Issavi, Amin Afshar-Naderi and Hadi Asgari, have been sentenced to a total of 45 years in prison on charges of acting against national security and spreading propaganda against the system through evangelism and the formation of house churches.

Pastor Victor Bet-Tamraz and Shamiram Issavi, ethnic Assyrian Christians, and Amin Afshar-Naderi and Hadi Asgari, Christian converts, have been sentenced to 5 to 15 years in prison.

Holding Christmas gatherings, organizing and conducting house churches, and travelling outside Iran to attend Christian seminars, all of them are known as “illegal church activities” which “threaten national security”, and security agencies including Intelligence Organization of the Islamic Revolutionary Guard Corps and the Ministry of Intelligence, and the Islamic Republic’s judiciary attach these activities to the case, and the judge will issue a verdict based on this attachment.

The four Christian citizens who are all currently free on high bails, are awaiting the verdict of the appeal court.

This case was opened due to the incidents occurred on 26 December 2014, when Victor Bet-Tamraz was arrested with Amin Afshar-Naderi and one other individual after plain-clothed security forces raided his home in Tehran during a private Christmas gathering. They were taken to Tehran’s Evin prison where they had no access to their lawyers and little contact with their families. They were released on bail several months later.

On 21 May 2017, they were put on trial with Hadi Asgari, who had been arrested in a separate incident on 26 August 2016 in the city of Firuzkuh, Tehran Province. In July 2017, Branch 26 of the Revolutionary Court in Tehran sentenced each of them to 10 years in prison on the charge of “forming a group composed of more than two people with the purpose of disrupting national security” in relation to their church activities.

The same court sentenced Amin Afshar-Naderi to a further five years in prison for “insulting Islamic sanctities” for a comical Facebook post he shared from someone else’s account that adopted a Quranic writing style about the sharp rise in the price of chicken in Iran.
Hadi Asgari was released on bail in April 2018.

On 19 June 2017, Shamiram Issavi was summoned to the Office of the Prosecutor in Evin prison and charged with offences related to her practicing her Christian faith. In January 2018, Branch 26 of the Revolutionary Court in Tehran sentenced her to five years in prison for “membership of a group with the purpose of disrupting national security” and another five years in prison for “gathering and colluding to commit crimes against national security.” / FARSI