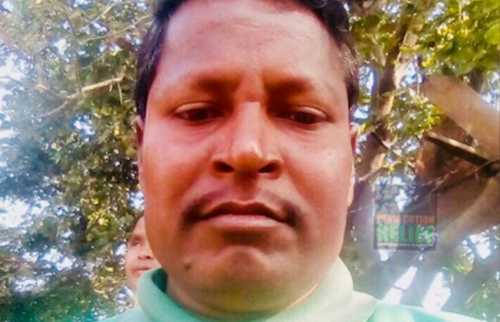 (Morning Star News) – Maoists took responsibility for the gruesome slaying of a pastor in eastern India (May 1), but area Christians said they suspected Hindu extremists put them up to it.

Abraham Topno, pastor of Pentecostal Church of God, was kidnapped by unidentified gunmen in Ranchi District, Jharkhand state, who slit his throat and beheaded him, his driver told family members. He was 46.

The body of the pastor, who ministered in the area for more than 20 years, was found with his head severed from his body, and his vehicle was set on fire. Though Maoists appeared to claim responsibility for the killing by leaving a note at the scene saying “Death to police spy,” relatives of the pastor expressed their doubts, saying Hindu extremists likely mobilized Maoists to carry out the execution.

Pastor Topno was ambushed and kidnapped about a half mile from his village of Kubasal while on his way back in a public carrier, a Mahindra truck. About 20-25 unidentified gunmen ambushed the vehicle, dragged the pastor and the driver out and covered their “faces completely with a cloth bag,” reported the driver after returning. The assailants spared the driver.

The pastor’s nephew, Aman Christochit Herenz, told Morning Star News that when his uncle did not return late last night, he left home in search of him on his motorbike.

“They started to talk to my uncle while the driver was made to stand at a distance,” he said, citing the driver, Ranga Singh Munda. “His ears were covered along with his face, so he could not make out their conversation. The Maoists then slit the neck of my uncle and chopped off his head from his body and set the vehicle on fire while not interacting with the driver at all.”

The driver was later told to go, and he reported the crime to Topno’s family.

“From a distance I saw a vehicle on fire, and I could sense something was wrong,” Herenz said. “I know it is a Maoist area and, sensing trouble, I returned home, not knowing that it was the same vehicle that my uncle was riding that was in flames, and my uncle lying dead beside it.”

Pastor Topno and the driver were kidnapped around 5 p.m., and Topno was killed around 9 at night, he said.

“The Maoists have claimed responsibility of killing my uncle stating that he was a ‘police informer,’” said Herenz, who roundly denied the allegations against the pastor.

Pastor Nuas Mundu, senior pastor of the Pentecostal Church of God in Murhu village, Khunti District, about 75 kilometers from Topno’s village, said he too suspected that Hindu extremists were behind the slaying.

“We know that he was a vibrant evangelist, a pioneer missionary, and we suspect that Hindu extremists are behind his killing,” Pastor Mundu said. “Maoists will kill anybody for money, and if someone pays them, they will do the job for them.”

“In the past Christian missionaries did not have much trouble from the Maoists, but lately it’s seen that they are trying to harass local Christians across Jharkhand and East Godavari jungles,” Thomas said. “We don’t know the reason for the same, but definitely they have also deviated from their ideologies and have political affiliations.”

The pastor’s body was taken for autopsy this morning, and results are awaited.

On July 29, 2016, Communist Party of India (Maoist) guerrillas known as Naxalites killed pastor Yohan Marayya in East Godavari District, Andhra Pradesh, leaving a note near his body stating that he was killed for being “very friendly” with police (an informant), accumulating wealth and “exploiting the poor.” The note also warned that 10 more people would be killed, including six pastors.

Area church leaders, however, said the accusations were untrue, telling Morning Star News that Pastor Marayya was killed for the thriving ministries he and his brothers were carrying out, which threatened the communists’ influence in the area.

Kubasal village is situated in the Tamar Block of Ranchi District, where Pastor Topno’s congregation meets in homes. The headquarter of the Pentecostal Church of God is in Itarsi, Madhya Pradesh.

The hostile tone of the National Democratic Alliance government, led by the Hindu nationalist Bharatiya Janata Party (BJP), against non-Hindus, has emboldened Hindu extremists in several parts of the country to attack Christians since Prime Minister Narendra Modi took power in May 2014, religious rights advocates say.