Home » Christian Persecution » When is it good to see red? Today, Wednesday, November 22

When is it good to see red? Today, Wednesday, November 22 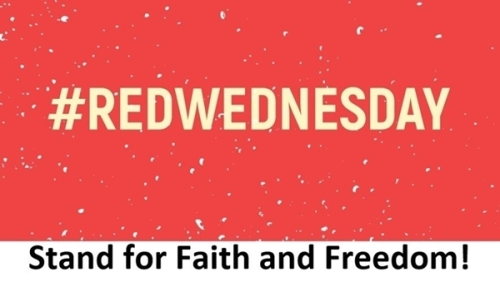 It is good to see red when the red is a sign of #RedWednesday. This is an effort taking place tomorrow, to call attention to those who are persecuted for their faith around the world, using red. Red is the color traditionally associated with Christian martyrs, but this effort is for all victims of persecution and of anti-Semitism globally.

Many thanks to the 21st Century Wilberforce Initiative (21CWI) for introducing this campaign into the United States. #RedWednesday began in the United Kingdom, as a creation of Aid to the Church in Need(ACN-UK). ACN-UK envisioned a day on which the color red would be “floodlit on buildings, churches and other places of worship, social media and various other delivery paths to create awareness about the rising problem of persecution.” And they have been quite successful! The Houses of Parliament, Westminster Abbey, and even the London Eye — the giant Ferris Wheel — show their solidarity with the persecuted, lighting up with a fiery red glow, on November 22, #RedWednesday.

21CWI envisions a similar response of compassion and solidarity in the United States. They have been encouraging those who want to show solidarity to wear red on November 22, post photos of themselves wearing red on social media (using, of course, the hashtag #RedWednesday), and to use red spotlights or floodlights for the day. 21CWI’s Director of Policy Relations has convictingly added, “The persecuted do not just need your compassion – they need your citizenship. They need you to get other citizens to stand for faith and freedom. #RedWednesday is the first step.”

There are many other suggestions for how to stand in solidarity with the persecuted on the 21CWI website, and in a special dropbox they have created for the occasion. But here is a sample of memes you can use on Facebook, Twitter, and other social media to honor the persecuted on #RedWednesday, courtesy of 21CWI:

Today is #RedWednesday! “Wear red, light red” to stand for #ReligiousFreedom for all!

Around the world 79% of people live in countries with high levels of persecution. #RedWednesday

No one should be denied basic needs because of what they believe! #RedWednesday

Persecution is: denial of services, tearing down houses of worship, mob violence. No more! #RedWednesday

You are probably thinking, “this is awfully last minute, Faith, after all, tomorrow is Wednesday, November 22!”

And you’re right! Mea culpa. When you are the one person focusing on international Christian persecution, without an assistant, some things get pushed to the last minute. I know you are preoccupied with family and friends and food. . .but. . .you know the whole Matthew 25 deal. There’s Jesus checking out the sheep and the goats and telling you, His lamb: “I was being persecuted, and you took the time to wear red, share the message of the persecuted, and show Me that you care.”

So lay aside your scheduled sartorial splendor for the day before Thanksgiving and find red garments to wear. Take a photo, tweet a meme, post on Facebook, or do more of the actions suggested by the 21CWI. You will be standing in solidarity with the persecuted. And you will be encouraging them. We will find a way to share your photos with all of our contacts the countries where persecution is taking place so they can let your persecuted brothers and sisters know you not only “see red” because of the injustice, prejudice, cruelty, and pain with which they are afflicted by their persecutors, but that you wore red to show them that you stand with them.

By our friend, Faith McDonnell at IRD

Save the photo below and use it as your cover photo on social media.

By VOICE OF THE PERSECUTED in Christian Persecution, Christian Persecution News, EVENTS, Get Inspired!, How you can help on November 22, 2017.
← Pakistani Christian family arrested during publicized raid by the Thai Authorities TURKEY – The crisis of religious minority schools worsens. Now there are only 24 →