Home » Christian Persecution » LEBANON – Iraqi Christians protest “We do not want to go back to Iraq, give us permission to emigrate”

LEBANON – Iraqi Christians protest “We do not want to go back to Iraq, give us permission to emigrate” 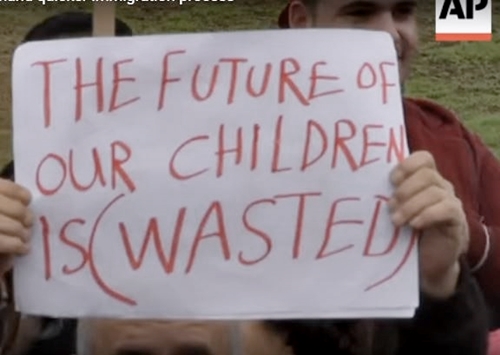 Agenzia Fides reports that Iraqi Christian refugees organized a demonstration in Beirut on October 11, 2017 in front of the offices of the High Commissioner for Refugees to ask the competent authorities to remove the obstacles posed to their expulsion requests towards other Countries, registered in the competent offices of several foreign diplomatic missions operating in the Lebanese capital. The demonstrators reiterated that they have no intention of being repatriated to Iraq, and have also expressed critical considerations towards their respective ecclesiastical authorities, arguing that they also contribute to curbing and preventing the granting of expatriation permits, because they are afraid to see the Christian presence in Iraq irreparably diminish.

The demonstration confirms the impression that much of the Christian refugees who have left Iraq have no intention of returning to their country, and they do not even intend to take root in Lebanon, but hope to emigrate soon to some Western country. (GV) (Agenzia Fides, 13/10/2017)

In February, some 200 Iraqi Christians protested outside the United Nations headquarters to demand the speeding up of their resettlement process.

In conversations with Iraqi Christians, who’ve left the country, told Voice of the Persecuted that entire families (or tribes) have left and now live in western countries, including the USA. More than one family relayed how volatile the situation is for Christians in Iraq. “We were forced to leave all we had behind. None of us, not one relative remains. We left our generational homeland set to never return.”

Please pray for Christians fleeing persecution, in countries of concern. That they will receive special consideration for resettlement, as they’re run out of places to live in peace.