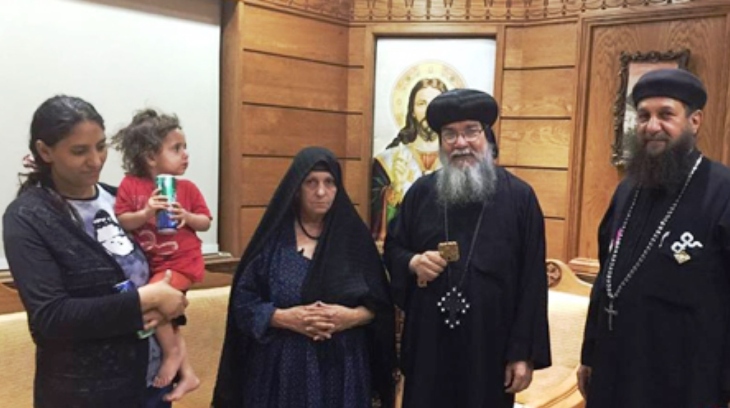 This report is based on several Arabic language news sources and contacts. (Raymond Ibrahim) A 70-year-old Christian woman was stripped naked, savagely beat, and paraded in the streets of Egypt to jeers, whistles, and yells of “Allahu Akbar,” after a mob of some 300 armed Muslim men descended on her home.

Her crime?  Her son is falsely accused of having a romantic relationship with a Muslim woman, which is banned by Islamic law, or Sharia—the same body of teachings that prescribes the collective punishment of non-Muslim “infidels.”

Seven other Christian homes were also torched by the rampaging mob.

While she was on the ground being kicked, cursed, and spat upon, Sa‘d Thabet, the elderly Christian grandmother, managed to slide herself underneath a wagon.  While hidden there, an unidentified woman slipped her some garments, and the traumatized woman eventually managed to escape.

“I never saw the woman who covered me and don’t know how I survived,” she said during a closed meeting with clergymen of the Coptic Christian Orthodox Church.  They testified that her body was covered with wounds, adding that, “though she is strong, it is sometimes hard for her to speak; she’s always fighting back tears and sometimes breaks down.”

For some time prior to the attack on Thabet, her household had been receiving threats.  On the morning of the assault, some of the home’s property was stolen and vandalized.  Wearied of the constant harassment, she and her husband went to local police who responded by threatening and kicking them out of the station.  A few hours later, around 8 pm, the attack occurred.  It took the same local police over two hours to appear, giving the mob “ample time,” as one clergyman put it, to sate its savage impulses.

When asked why she reported the incident on May 24—four days after it happened—Thabet said:  “I tried to hide and suppress what occurred, but I could only take the feelings of humiliation and oppression for four days, at which point I decided to return to the local police station and testify about what happened to me before those who had refused to hear me.”

This 70-year-old is hardly the first Christian woman in Egypt to be treated so.  In 2013, rioting Muslims “burned down a Christian school, paraded three nuns on the streets like ‘prisoners of war,’ and sexually abused two other female staff even as at least 58 attacks on Christians and their property were reported across Egypt over the last four days. At least two Christians have died in the attacks.”

Nor is this an “Egyptian” phenomenon; it’s an “Islamic” one. In Pakistan, a 28-year-old pregnant Christian mother of four was stripped naked, beaten, and forced to march nude in her town by two Muslim brothers following an argument.  She lost her baby in the ordeal, which “was motivated because of Bibi’s [Christian] religious beliefs.”  Similarly, a Muslim family kidnapped, beat and left naked on the streets an 8-year-old Christian girl, as a way to “punish” her uncle for pursuing a relationship with a female member of the Muslim family.

In short, every aspect of this most recent attack is part of a well-established pattern that has played over in Egypt, Pakistan, and other Muslim majority nations countless times: a Christian is (often falsely) accused of some infraction; his family and possibly entire village is savagely attacked, beat, molested, and mugged by the mob; and police take their time to arrive and do little when there.

After 3,000 Muslims attacked the Christians of a village near Alexandria in 2012, it took the army an hour to arrive—even though it was only one mile away: “This happens every time,” said a Christian eyewitness.  “They wait outside the village until the Muslims have had enough violence, then they appear.”

As Minya’s most senior Christian cleric, Anba Makarios, put it during a televised interview concerning Thabet’s ordeal, if a Muslim man was pursuing a Christian woman, police’s response “would not have been anything like what happened….  No one did anything and the police took no pre-emptive or security measures in anticipation of the attacks.  We are not living in a jungle or a tribal society.”

Unfortunately, the good priest is wrong.  Islamic culture—founded as it is by an Arab tribesman—is inherently tribal.  The umma is the super tribe of Islam, meaning Muslims side with Muslims against all “infidels”—that is, all outsiders—according to the doctrine of “loyalty and enmity.”  Highly revered scholar of Islam, Ibn Taymiyya (1263-1328), held that Muslims are “obligated to befriend a believer — even if he is oppressive and violent towards you and must be hostile to the infidel, even if he is liberal and kind to you” (The Al Qaeda Reader, p. 84).  Hence why Muslim husbands are told to hate—and show they hate—their non-Muslim wives.

This is the hostile, un-assimilating, tribal mentality that the West is importing by the millions. In Muslim-majority nations—where Christians and Muslims look the same, speak the same language, and are virtually indistinguishable—being non-Muslim is enough to subject one to the aforementioned hate, violence, and discrimination.  How much more are Muslims expected to view and treat those who are not only non-Muslim but completely alien in all ways?

HELP SAVE THE PERSECUTED

Together with your generous help, we can reach the goal to alleviate horrific suffering. In darkness and desperation, let us serve in love, with open arms and giving hands to provide light and hope.

Every day, we thank God that He is working through you to care for His children and to further His Kingdom! As you greatly bless others, may God continue to bless you. Thank you so much for your support. We couldn’t do it without you!
You may also send your gift to:

By VOICE OF THE PERSECUTED in Asia, Christian Persecution News, Pakistan on May 27, 2016.
← Police Rescue 13 Year Old Abducted And Forcibly Converted To Islam Christians Beheaded and Slaughtered on Easter: Muslim Persecution of Christians, March 2016 →