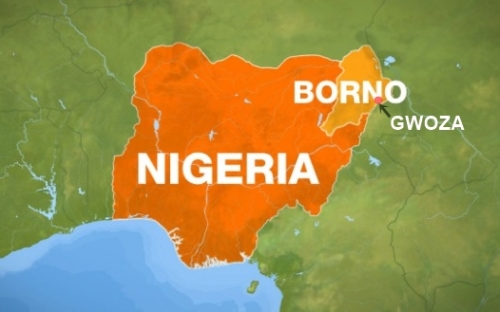 (Voice of the Persecuted) The Islamic Ideology of converting the Christian community with violence has come to stay in Northern Nigeria. The capture of Gwoza local

government by Islamic Militants on 6th August 2014 was reported all over the media. They mounted their black flag with sword logo in the middle of the town, destroyed several houses, burnt down churches, captured military personnel and brutally massacred the people. Muslim owned media houses quickly went on air and told world cable channels that Muslims were the ones that suffered in the attacks. They didn’t report that Christians were slaughtered like animals on account of their faith, some burned alive after being thrown into fire. And that Christian remains were left unburied decomposing on the ground .

Prominent Christians who suffered in the attack stated that many Christian youths were forcefully recruited to join the insurgents in working for Allah. One eyewitness named those he knew that were massacred in Church of Brethren (EYN) as Markus Kulka (50 years) Ishaku Zhadava (55 Years) and Student Pastor Gambo Zakariya (35 Years) who had his throat slit for refusing to convert to Islam.

Another witness who narrowly escaped the insurgents recalled that there were many Christians who gave up and the insurgents took them away. He told Voice of the Persecuted’s correspondent, “I’m not sure whether they have killed them or not.” “There were also brave Christians who died because they refused to compromise. Adamu Vime (55 years) and Godiya Markus (20 years) were killed in my presence” he said. Sharing his own experience he observed the Boko haram seemed to hate the sign of the cross most. “All the Christians wearing a cross were said to be slaughtered. Any church building that had a cross on it was brought down.”

Since from the time the insurgents took over Gwoza and mounted their flag, hundreds of Christians have been killed and their property were looted. Those who were able to escape went to Michika (a Local Government Area of Adamawa State, Nigeria) as displaced people, some stopped in Madagali, Gulak, Mubi and other villages in the borders of Borno and Adamawa States helpless without shelter, food or water to drink. “I have not eaten for 6 days,” said one of the survivors.

Our correspondent gathered that thousands of Christians who ran to the hills were still trapped there by the Boko haram. “They have been there for a week without food or water”, a witness said. Many who escaped to the hills, but bled to death from bullet wounds. One of the pastors spoke directly with the Boko Haram telling them, “What you’re doing is not a work of Allah, repent or else you will enter hell.” They then killed the pastor. One of the Christians told our correspondent, “I saw it with my eyes. His corpse laid decomposing on the ground until some elderly women went and buried it.”

Voice of the Persecuted

secured credit/debit card payment method, or mail your check or money order to:

Thank you for being a part of this mission by your continued support to aid our persecuted brothers and sisters. We couldn’t do it with out you!

By VOICE OF THE PERSECUTED in Africa, Christian Persecution News, Nigeria on August 24, 2014.
← Inspired Through Trial By Faith of Abedini’s God’s and Humanity’s Heroes – Inspired By Faith Of The Abedini’s →