Breaking: PAKISTAN – Asia Bibi’s case disappears from the list of hearings, the possibility of an appeal diminishes 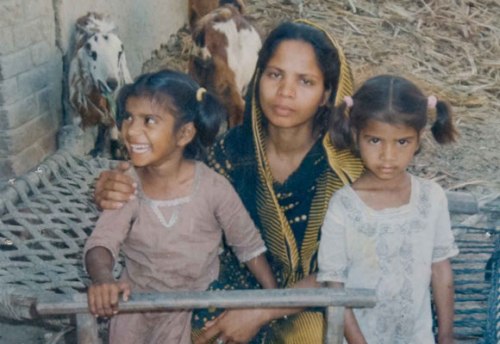 Mother of five, Asia Bibi with two of her children

Lahore (Agenzia Fides) – The first hearing of the appeal for Asia Bibi, a Christian woman sentenced to death for blasphemy, will not take place today, 27th May, and no one knows if and when it will be scheduled again. This was reported to Fides Agency by the lawyers engaged in the defense team of women. Speaking to Fides Agency, the lawyer, Naeem Shakir, one of the lawyers defending Asia Bibi, does not hide his dismay: “The case was in the list of hearings scheduled for today. Then it suddenly disappeared. We do not know why. I can only say that what is happening is not normal”.

The lawyers are waiting for an official reason from the administration of the High Court of Lahore to explain the serious anomaly which results in the lack of justice for an innocent victim.

“At this point we do not know when and if the case will be examined” they explain. Since February the process has been postponed 4 times for various reasons and the trail has never started.

According to observers, the judges of the Court of Appeal do not want to take responsibility to examine the case for fear of retaliation by radical Islamic groups. In the past, judges who acquitted Christians for blasphemy were killed.

As Fides learns, bitterness and disappointment can be felt even among Asia’s family members. In the coming days – the woman’s lawyers say – the woman, who is in the women’s prison in Multan, will be informed on the latest developments in the case that concerns her.

Asia Noreen Bibi was condemned for blasphemy on June 19, 2009, pursuant to Article 295c of the Penal Code, by the Muslim Mullah, Qari Muhammad Sallam. After a trial before the Court of First Instance in Nankana Sahib, Asia was sentenced to death on November 8, 2010. The Appeal was filed before the Lahore High Court on November 11, 2010. But, for religious reasons and political pressures, only four years after the case has been taken into consideration. Today, the ongoing litany of posponements has not yet allowed the holding of the first hearing. (PA) (Agenzia Fides 27/05/2014)

Please keep our dear sister, Asia and her suffering family in your prayers.

By VOICE OF THE PERSECUTED in Asia, Christian Persecution News, Pakistan on May 27, 2014.
← Nigerian Military Has Information On Location of Abducted School Girls China’s Christians Facing Renewed Threat of Jail for Faith →