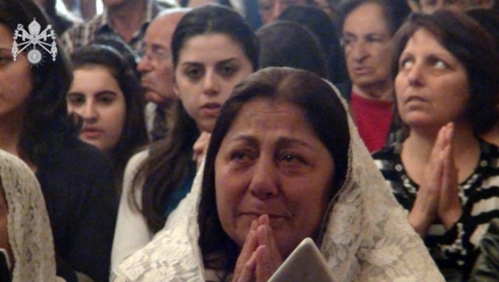 The Armenian Weekly – “A delegation of priest from the Catholicosate of Cilicia who had visited Latakia to assess the needs of Kessab Armenians and express solidarity returned to Antelias after the Sunday Badarak.

According to the delegation, the local Armenian community, the International Red Cross, and the Red Crescent are providing assistance to those who have sought refuge in the city. An estimated 2,000 Kessab Armenians are currently in Latakia.

‘Many Armenian families are staying with relatives and friends, while others have sought refuge in the Armenian Church and the church’s hall,’ said Syrian Armenian community activist Nerses Sarkissian during a phone interview with Weekly editor Khatchig Mouradian.

‘The Aleppo Armenian Prelacy as well as the Red Crescent are providing relief and assistance to these families in Latakia,’ Sarkissian added.

The fighters, mostly from the extremist Nusra Front, who have entered Kessab are desecrating churches, pillaging houses, and destroying government buildings, Sarkissian told the Weekly. A few Syrian Armenians have been unable to leave Kessab, and their fate is unclear, he added.

Perched in the northwestern corner of Syria, near the border with Turkey, Kessab had, until very recently, evaded major battles between the army and rebels. Many Syrians had taken refuge there because of the relative calm in the area over the past three years.” Read more.

By VOICE OF THE PERSECUTED in Christian Persecution News, Middle East, Syria on March 25, 2014.
← Western Ignorance of the ‘Conditions of Omar’ Asia Bibi-Disappointment As Courts Postpone Appeal Again →