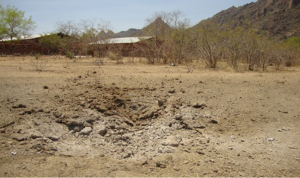 A school supported by Samaritan’s Purse is attacked

(Samaritan’s Purse) The Heiban Bible College in the Nuba Mountains of Sudan was bombed for the second time in a little over a year.

The attack is believed to have taken place by the Sudan Air Force, as the government in Khartoum continues to wage war against its own citizens. Ministry partners report that two airplanes dropped a total of nine bombs. Two landed inside the compound, and seven just around it. Thankfully, no damage was done.

“Praise God, no one was hurt,” a staff member at the college said.

An additional five bombs were dropped in town, near the market and the clinic. One lady was hurt in those, but the injuries were not life-threatening.

The college also was bombed on Feb. 1 last year.

Samaritan’s Purse has supported the Heiban Bible College since it was founded in 2007. We constructed classrooms, dormitories, kitchens, a dining room and housing for teachers. In 2010, Franklin Graham spoke at the ceremony for the first graduating class of 36 students.

Samaritan’s Purse has been working throughout Sudan since 1993, providing hundreds of thousands of people with food, medical aid and vocational training. Samaritans Purse has also worked to rebuild churches in South Sudan and the Nuba Mountains that were destroyed during the country’s civil war.

We currently are providing emergency relief to refugees who have crossed the border into South Sudan to flee the fighting in South Kordofan and Blue Nile States. Since August, tens of thousands of these conflict-affected people have received food, clean water, medical care, temporary shelter, and trauma counseling through Samaritan’s Purse projects.