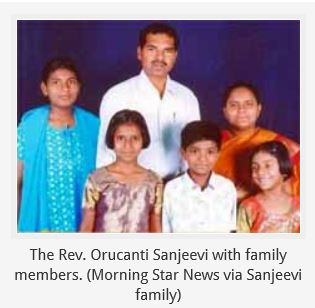 NEW DELHI (Morning Star News) – The gang that knocked on the door of a pastor’s home in Andhra Pradesh state and stabbed him to death earlier this month consisted of Hindu extremists, authorities said.

State police have arrested seven of the eight members of the Hindu Vahini group accused of attacking pastor Orucanti Sanjeevi on Jan. 10 at his home in Vikarabad, 64 kilometers (39 miles) from the state capital of Hyderabad, Area Deputy Superintendent of Police J. Ram Mohan Roa told Morning Star News. The other suspect is absconding, he said.

Pastor Sanjeevi, 48, succumbed to his injuries on Jan. 13.

“The key member of this module is Gandikota Srinu, alias RK, a full-time member of the Hindu Vahini, and these same people attempted to kill another pastor in Narketpally,” Roa said.

The Rev. Madhusudan Das of the Evangelical Fellowship of India said the Hindu extremists were upset about Christian growth in the area.

“The area where the pastor was killed was a strongly Hindu-dominated area,” Das said. “However, the church has seen growth as many people decided to follow Christ. The extremists harbored strong resentment against the pastor for the same reason.”

A large throng of Christians had besieged the state chief minister’s office on Jan. 14, protesting the killing and demanding justice, with police detaining some of the protestors.

At about 8:30 p.m. on the night of the attack, the Hindu extremists knocked on the door of the pastor’s house, claiming they wanted to pray with him, sources said. When his wife, Pramila, opened the door, they hit her with an iron rod, they said.

The Hindu extremists then stormed into the house, stabbed the pastor, beat him with clubs and hit him on the head with an iron rod. His wife managed to run out and call for help.

“The pastor was lying in a pool of blood when some people came to help him,” area Christian leader Franklin Sudharkar told Morning Star News. “The attack lasted only about 10 minutes, but the pastor sustained severe injuries as he was stabbed in the liver, intestines and spleen.”

He was rushed to a hospital and put on ventilator, but he succumbed to his injuries at about 3 p.m. on Jan. 13.

Sajan K. George, president of the Global Council of Indian Churches, told Asia News that members of a Hindu extremist group had engaged the pastor in a heated discussion about three months ago and threatened him.

Pastor Sanjeevi had overseen the 250-member Hebron Church in Vakirabad.

The attack appeared to be well-planned, and police believe the extremists have made a hit list of targets, Roa said.

On Dec. 29, he said, the same Hindu extremists knocked on the door of the house of Baptist pastor Nama Moses in Narketpally, about 170 kilometers (105 miles) from Vakirabad, and attacked him in a similar way. The pastor opened the door thinking the person knocking was seeking shelter, said Moses Vatipalli of the All India Christian Council (AICC).

“One extremist with a knife barged into the house and started stabbing the pastor and the wife while two were standing outside,” Vatipalli told Morning Star News. “The pastor received nine stab wounds, and his wife sustained seven stitches on her head where the extremist hit her with an iron rod.”

The couple received hospital treatment for 15 days, and the pastor was still on bed-rest at press time.

Roa added that the assailants “held grudges against the Christian couple, as his grandparents started attending Christian meetings regularly.”

In the same area on Aug. 9, 2011, masked Hindu extremists attacked pastor Jaya Raj and an unidentified church member at midnight at the pastor’s home. The assailants broke Raj’s left hand and broke his nose, and the other Christian sustained severe injuries to his head, reported the AICC. Both of them received hospital treatment.