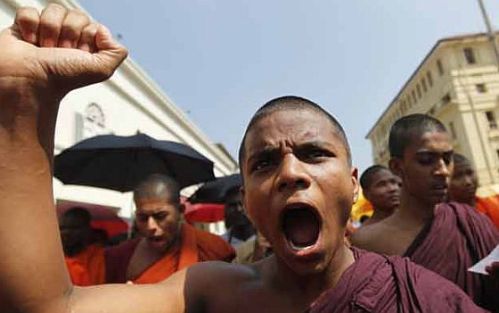 Buddhist Organizations in Hikkaduwa staged a protest in the area against Christian prayer centers operating in the region.

The monk-led mob resisted the police and destroyed the property hurling stones at the two prayer centers. The mob broke doors, windows and burnt religious signs and books.

Local media videoed the violence and broadcast in the evening news on TV channels.

The residents of these religious places were threatened and the police temporarily closed the main Galle Road as residents entered the Galle Road passing the Hikkaduwa town.

The Buddhist monks that led the protest said that the administrative authorities had ordered the prayer centers withdrawn.

However, the pastors in charge of these centers said they were registered duly and the eviction order is illegal.

The rising religious intolerance from extremist Buddhist monks-led organizations in Sri Lanka has raised alarms among the moderate public and if authorities fail to take adequate measures to curtail the violence the actions of thes extremist groups would have serious consequences, civil society leaders warn.

By VOICE OF THE PERSECUTED in Asia, Christian Persecution News, Sri Lanka on January 14, 2014.
← Pastor Saeed’s Wife To Prepares To Speak At Geneva Summit AFRICA: A Sinister Plot Behind The Massacre In CAR? →