AFRICA: A Sinister Plot Behind The Massacre In CAR?

There is a very dark spirit at work as world powers vie for control. Many know of the wars that wage in the Middle East and Africa. This report will help us breakdown the recent events taking place in Central African Republic (CAR). Blood-curdling news is coming out in this region….news of a systematic sectarian cleansing. I use the word systematic, as you will see the history of it being revealed and how it’s been building for years. One can connect the dots from Darfur and the ‘Janjaweed’ to the current crises and the interim president Djotodia. (More)

There is much controversy and darkness associated with Michel Djotodia, the self proclaimed president of CAR who has now been pressured to step down. He had formed the rebel group ‘Seleka’ to gain power. It’s been said that the uprisings happening now is not typical of Muslims forcing converts but a grab for power, what ever the costs. When you look a little deeper, you’ll find in Djotodia’s own statements.

In the months that followed Seleka’s takeover, the group was criticized for continuing to perpetrate violence against civilians. Djotodia was formally sworn in as President on 18 August 2013. On that occasion he said that he hoped to be “the last of my countrymen to have to take up arms in order to come to power”. He also vowed that he would not stand as a presidential candidate.

In deciphering this, we will try to peel the layers back to find what’s at the core. David Smith (Guardian UK) described it as, “A massacre of the innocents is taking place in the heart of Africa as the world looks the other way.” We agree and there is more to this, much more.

Major news outlets are reporting that Christians are committing atrocities of beheading children and even cannibalism. What is most disturbing is these reports, complete with video of so-called Christians slaughtering with a machetes, is the lack of proof or evidence to what is truly taking place.

They have even dredged up old reports of suspicious rumors that the prior president, François Bozizé was a cannibal who fed human meat to visiting dignitaries. The alleged accusations were investigated with no evidence ever found, charges were dropped and the president vindicated. But the propaganda makes for sensational headlines attracting many readers who will share with others. It’s hard to know how much truth is emanating from these reports, but when looking back at the history of this war and region, we can say it is eye opening.

This from Amnesty International in November 2013 show’s proof of the devastation in this country: (New satellite images reveal shocking aftermath of abuses in Central African Republic) 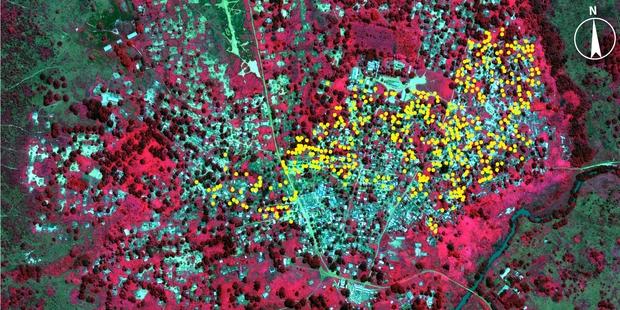 In the Bouca area, approximately 485 structures—represented here by yellow dots—appear burnt in imagery from November 2013. © DigitalGlobe 2013

Amnesty International continues to report the human rights abuses that may prove to be Crimes Against Humanity. They reported that since Dec. of 2012, hundreds of civilians have been killed while thousands are subjected to cruel torture, rape or other forms of inhuman and degrading abuse, which the Seleka are responsible for. There are claims of Seleka soldiers, bandits, and poachers burning properties and civilians end up suffering most in the power grab. These rebels are seeking revenge on Christians for supporting the new government. And reports of armed resistance groups fighting to protect themselves. Could it be an attempt to start a Holy War of Biblical proportions and why?

As the Janjaweed did in Darfur, the civilians watch their families being tortured, raped, murdered and their villages burned to the ground. With insufficient security being provided, they have rose up against the attackers.

The world turns the other way, while children are being recruited to fight, they too are tortured and killed. In one report a man describes the torture of his son. They spread a pepper paste on his armpits, legs and up his nose, then beat him almost causing asphyxiation. This horrific event is considered mild torture compared to what others experience.

The atrocities are not new. Amnesty International reports that it also happened during Bozize’s government and he also failed to intervene to stop it. Seleka members have grown from 5,000 in March, 2013 to 20,000 two months later. Most are criminals freed by seleka, highway bandits and poachers. I encourage you to read the detailed report by Amnesty International from March of 2013. (Here)

So why is the world silent? French and UN troops are there, yet still unable to end the chaos. World organizations are demanding for more intervention to avoid a humanitarian catastrophe.

Noteworthy is the world’s power grab for African minerals, oil and other resources the past few years. Is this the reason they are pitting these people against each other? CAR is predominantly Christian, with a small percentage of Muslims. They say it’s hard to know the exact numbers, as the Christian population is sedentary while the Muslim population is nomadic. In the past, they have relatively lived in peace, until armed groups invaded.

On Saturday, reports of Djotodia’s resignation sparked celebrations in the Christian communities. The western countries of France, Germany and the UN had sent extra troops fearing another Rwanda. Interesting is an excerpt from Reuters

The loose band of rebels had been held together by frustrations over underdevelopment of the north and desire for control over gold, diamonds, uranium and oil. Many of its men were battle-hardened fighters from Chad and Sudan.

Again, we find small references to the reasoning further stirring these groups against one another. Major publications are highlighting videos which claim are Christians waving branches and shouting, ’We have killed the Muslim’, referring to President Djotodia.

Is oil the real cause of this war? It has been reported by some that this is in fact the root cause, an oil pipeline in Doba. Apparently there is a 3-7 billion dollar pipeline between the Doba field in Chad and Cameroon. Could it be that investors were advised to stay away from the CAR, due to the instability that ramped up this so called sectarian violence? Could it be that the West and China were growing anxious and wanted those risks removed? It doesn’t take long while searching ‘Oil In CAR’ to find publications issuing warnings, as on Mining.com. and a publication called ‘African Energy’. Here is the lead into an article about the oil in CAR:

The prospect of Central African Republic eventually emerging as an oil producer is exciting a growing number of potential investors, including an aggressive New York-based private equity player, Chinese arms manufacturers, Gulf-based interests and a Brussels-based ‘NGO’ that won’t discuss its operations, as well as Colorado-based veteran Jack Grynberg.

I don’t claim to have insider information into these things, only a desire for the truth, no matter where it may lead. Evidence can not be found of Christians eating victims and beheading children that is not connected to the dark evil that has been emanating from this country. I will continue to watch and research, but for now much investigation still needs to be done. And with all the propaganda being shared, one must read between the lines.

The truth is over the last few years, Christian persecution has escalated dramatically in the Middle East and in Africa. Many are labeling what’s happening in the Middle East as a ‘Holy War’. Is it now spilling over into this region? What’s really going on?

This excerpt from an article in World Stage News also sheds light on how the violence against the Christians began:

WorldStage Newsonline— The Christian Association of Nigeria (CAN) in Kaduna State has accused the police invading a church to disrupt their Sunday service, thereby trying to create a religious crisis in the state, saying they may have no option than to defend themselves.

Voice of America reports,  as new transitional authorities try to restore order in the capital, residents say this crisis is political, not religious and the solutions to country’s problems lie in the political sphere.

“There is no religious crisis,” said Bangui resident Brice Ngagoui. “It’s just political manipulation because the rebels that came to power, [President Michel] Djotodia, are majority Muslim. Politicians took this community affiliation to give a religious connotation to this crisis. But in reality there is not an inter-religious crisis.”

Most of the innocent and persecuted have not asked for money, though even the fortunate can be found living in squalor. The number one thing they ask for, our prayers. We must come together united in prayer. Pray like never before, it is our direct connection with God and they do make a difference, He hears. Encourage others to pray for the innocent, the lost, and our brother’s and sister’s unjustly suffering in the world. I leave you with this from Paul:

Remember them that are in bonds, as bound with them; and them which suffer adversity, as being yourselves also in the body.

Articles may be reprinted with link and credit to VOICE OF THE PERSECUTED.