In an area of Northern Nigeria where government forces have been fighting to crush an insurgency by radical terrorist group Boko Haram, a Christian girl finds herself as a prisoner on the front lines. Quite literally, in a battle for her own life. In an interview with our Nigerian Correspondent, she tells the story of her captivity and daring escape.

19 year old Hajja was asked by her grandmother (Kaka Saratu Musa) to go with her to pick and gather corn from her abandoned home at Ghwa’a village in the hills of Mandara Mountains—Gwoza local government area of Borno State, Nigeria. Some of Hajja’s freinds, ages 15yr., 12yr. and one under 12 yr. volunteered to accompany them.

After they reached the abandoned home where the grains were kept on the mountaintop, a slim black woman  approached them asking to take the cornstalks. When Hajja’s grandmother refused, the woman left without saying a word. Unknown to them was the woman’s true purpose. She came to confirm their arrival and report it to the cousin of Hajja’s father, Isa Varah and Shuaibu Kalakwa Bala who had joined Boko Haram as active members.

In a short time, the woman, an informant and the Boko Haram members came to attack them. All the girls fled except Hajja’s grandmother who was not fast enough to run. Hajja hid among the rocks. When they caught the older woman and began beating her, she could no longer hide and let them hurt her grandmother. When she emerged from her hiding spot, they seized the young girl and released the elderly woman.

They took Hajja to a cave in Klala hills, an area of the mountainous region adjacent to the Cameroon border in Gwoza, Nigeria. There she met a heavy, black bearded insurgent called Kalakwa Wala. That night, they reached the Boko Haram camp inside a dreary cave of Ghraza hills. She spotted Ibrahim Tada Nglayike, the commanding leader of the camp. The following morning, the leader told her that she had been kidnapped because she was among the people that invited the Joint Task Force (JTF) who had killed many of their members. After beating Hajja mercilessly, he demanded she immediately convert to Islam. When she refused, he tied a rope around her neck and brought out a knife to slaughter her. Her father’s cousin intervened and took the knife from Ibrahim’s hand. She was then was given seven days to accept Islam or die.

On the Seventh day, Isa came to plead with her to accept Islam. He told her even if she did not accept it in her heart, it was better she become a ‘pretend Muslim’ than be slaughtered like animal. He added by saying, “It is the only way to escaped premature death.” Under the extreme pressure and fear, she was forcibly converted and given a Muslim veil to wear. The leader himself started teaching her Quranic verses and how to pray five times in a day. The group was elated with her conversion, as it was the early days of Ramadan fasting. They claimed Allah would reward them bountifully for this great thing they had accomplished.

HER LIFE IN THE BOKO HARAM CAMP

Speaking to our correspondent, Hajja explained that throughout her captivity, they were always on the run. They slept in caves and open places in fear of the Joint Task Force (JTF). They gave her food only after they had eaten, though she had been the one to prepare it. Hajja was one of two women in the group with fifteen armed men. The other woman, named Amina was the wife of the camp leader. 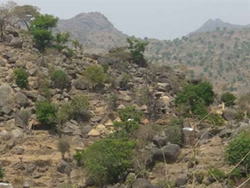 In the Mandara Mountains, they continually moved from place to place and cave to cave. They based in the mountainous region, such as Ghwa’a, Jiga, Klala, Tighadighile, Hirdimbe (Kai-Ktha) to plan and carry out operations on Christians villages. Among their popular route was to mingle with civilians and pretend as innocent people through the Government Secondary School in Ville ward, which directly linked the valleys to the local government headquarters. On another route they waded through rivers.

Hajja described the insurgents locations as rocky and rugged with confusing routes where they traveled. The group journeyed to Shiya Dawe near the Sambisa Games Reserve to get ammunition from a larger insurgent group. They took Hajja and the woman as cover to mislead security personnel at checkpoints. The women were then left afar as the men traveled further into the reserve to meet with their members and returned laden with ammunition.

Hajja described some weapons as very heavy, and recalled an attack where four of the insurgents were unable carry a single weapon on their shoulder. She was not shown where they kept these sophisticated weapons. She also told our reporter that she was taught how to cock a gun, but her major duty was to carry bullets behind the insurgents while their operations were going on.

Hajja had been held in the camp for almost three months serving as cook to the insurgents. She described them as heartless people with wild behaviors. They beat her and warned that if she dared tried to escape they would kill her parents, burn their house and destroy whatever belonged to her. At this point, the insurgents started to trust their hold over her and assumed she would no longer try to escape. They were unaware she had planned to run away.

One day, Hajja pretended she was very ill with a severe stomach problem. The leader ordered his wife, Amina take her to the Hospital in Gwoza to be treated. When they arrived, they saw the hospital was locked and closed. The woman took her to the brother of one of the insurgents, but he refused to host them. Amina decided to take her back to the camp. Hajja decided to set her plan into action, she was not going back. She started struggling with the woman in midst of the populace. Out of the usual capacity of captivity, the leader’s wife tried to force Hajja, but the girl held her ground and alerted the people around them. For fear of being caught, her captor ran and disappeared. Hajja was then taken to her father’s house and later preceded to a different location for safety.

It was quite empathetic how Hajja’s parents suffered a double tragedy. Her brother had been labeled as a Boko Haram member by a powerful politician who disguised insurgents as civilian JTF. Her brother was arrested by the so-called civilian JTF and handed over to military personnel in Yola. After his innocence had been confirmed, her family had been celebrating his release when they saw Hajja freed physically, but suffering from psychological torture. She looked deeply traumatized with a ghostly appearance. They were all brought to tears. The young girl was very anxious and apprehensive, as if she would be returned to captivity at any moment.

“I felt very bad about my conversion as if God would never forgive me.”

It took several counseling sessions before she finally agreed that God would not count it against her. The mental trauma she suffered was not yet fully healed. She was disturbed by sleepless nights with a series of nightmares about the activities of the insurgents. She told them she had not been raped, but she felt like her life had come to an end. She was taken to a medical specialist to be examine medically and psychologically. It was recommended that she change her environment to help her eventually get over the ordeal.

Hajja was then taken to Polytechnic school in Nigerian State to study an engineering course. Her education fee was paid by a bank draft ($1,260) offered to her by VOM. She was given a Bible as well to serve as her companion, she said.

The recent campaign by Boko Haram kidnapping young women and girls like Hajja, continues. They threaten them with death to convert to Islam and then force them into marriage. Many are raped and brutally beaten when they cry or try to speak. They are forced into submission and become their slaves. The Boko Haram has also been using these women as decoys to capture Nigerian soldiers. They suffer even greater psychological torture when the soldiers are caught and throats slit in front of them. Though some may gain their freedom by escape, many remain trapped by the mental trama of what they have endured. Unable to bear what has been done to them, they are often at risk of committing suicide.