Home » Word for the Body of Christ » Persecution in the Bible » Matthew 10:16-42: Jesus warns about Persecution 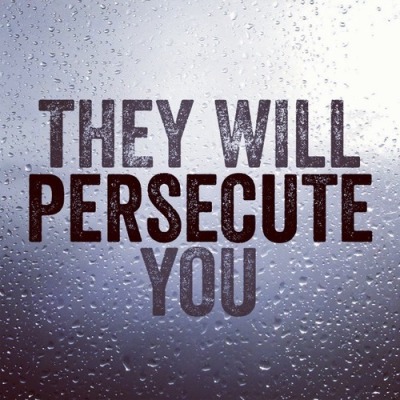 Jesus claimed [to] his disciples:  he was the one sending them. He acknowledged openly  that he was sending them into a dangerous world. They would be defenseless as sheep among a pack of wolves. He advised them to be as wise as serpents; cautious as not to fall into traps and avoid trouble. They were to be harmless as doves: bringing no harm to anyone and wishing no harm upon anyone, that they remain blameless.

Jesus prophesied of their suffering. He told them to be cautious of men– who can be evil and deceptive for the purpose of delivering them over to authorities. Disciples would face persecution from both the religious and political realms. They would beaten in synagogues and dragged before kings and governors. Their firm faith and testimony would serve as a witness– specifically, Jesus said, to the Gentiles. He told them not to fear because the Spirit would be with them, and not to be afraid of what they would say, because the Spirit would be speaking through them.

Jesus described the severity of those who oppose him by describing family turning against their own family over the gospel, even to the point of death. Jesus told his disciples to endure the persecution, and not surrender faith, and salvation would be given to them. The disciples will not merely be disliked or found annoying, but hated for the sake of Jesus. In the wake of great danger, the disciples were to flee to a safe place. The disciples will not have gone through all the towns of Israel before Jesus is glorified. In the wake of great danger, Jesus advised the disciples to flee to a safe place.

The disciples were not greater than Jesus, and they could not expect to be treated any better than he was. Therefore, persecution was unavoidable. Since Jesus was falsely accused of doing the work of the devil, so would his disciples.

Jesus told the disciples not to fear, but to proclaim the Gospel in the face of this persecution, because God’s truth would be revealed. The disciples could be confident in God’s Word. The destruction of the body by men was incomparable to the destruction of the soul eternally. Jesus told the disciples not to fear because God loved them and cared for their well being, even knowing the number of hairs on their heads. If God took care of the sparrows, how much more would he take care of the disciples, who were of great value to Him?

This decision would cause great division on earth. Again, Jesus referenced the division among family. Hurt caused by family is painful, sharp, and bitter.  Jesus wanted the disciples to fully understand the consequence of choosing Him. He wanted them to know that He had to be put first, and putting him first would cause them to be despised.

If a disciple were to surrender Jesus for the sake of a worldly life, he would lose his life in eternity. Whoever would sacrifice their life for the sake of Jesus, would gain eternal life.

Jesus did not downplay the cost of following him. Christ is our authority. Christians live in an openly evil world, which hates the name of Jesus, for whose name Christians too will be hated.  Those who oppose Christ will despise those who follow him– they are like wolves, wanting to devour and destroy all that represents Jesus. We must be harmless and peaceful. This relentless hate can be witnesses in the bombing of churches and the terrorizing and slaughtering of Christians in Middle East and Africa. Christians in the United States have most recently observed cultural movements undermining prayer in the name of Jesus, forbidding military members from sharing their faith, the court ordered removal of statues and paintings of Christ, and even covered crosses for at political events. Jesus continues to face false accusations. Modern persecutors deny his divinity, which is to call our Lord a liar. If Our Lord is called a liar, then we, too, as his servants will be called liars. The sword Christ brought to the world is sharp enough to cut the greatest of bonds, even among family.

In the midst of these events, Christians cannot abandon the Gospel, or deny Jesus.  Jesus must come first. In our pursuits for spreading the Gospel we are to be bold but blameless. Suffering and persecution can be expected, but we are not to bend in our faith in Jesus. We need to endure, and not fear the persecution of men but the judgment of God. We should not fear, because God loves us, and cares for our well being. Christians are not to actively seek persecution, and can flee when danger is great. God loves us, and cares for us. We should not fear in giving our testimony, as the Spirit will speak through us, and it will serve as a witness to others. We will be representatives of Christ, and whoever welcomes us, welcomes him. We are to support each other in our ministries; even the simplest gifts help.

There is no middle ground when it comes to serving the Son of God. What will you answer, when God asks you how you treated his son, Jesus?

Tags: Christian Persecution, God, hated by the world, Jesus, Jesus warned of persecution, sharing the Gospel, they will persecute you

By VOICE OF THE PERSECUTED in Persecution in the Bible, Word for the Body of Christ on October 7, 2013.
← Pastor Saeed’s wife, Nagmeh Abidini Speaks to the Staff of Samaritan’s Purse House Passes Bill to Prevent Arrest of Priests for Holding Services at Military Bases During Shutdown →