Imprisoned American Pastor’s Testimony and Message About Persecution – Saeed’s Case To The U.N.

Video of his testimony and following message about persecution, dates back one month before he was again arrested.

Saeed’s Message to the Persecuted Church

Today, I had the opportunity to personally raise Pastor Saeed’s case before the United Nation’s Human Rights Council. Seated beside me was Pastor Saeed’s wife, Naghmeh.

As I told the Council, she represents the face of how Iran’s persecution of Christians truly has a worldwide impact. I implored the nations represented on the Human Rights Council to stand up for the most basic of human rights – the right to peaceably assemble in exercise of one’s religious beliefs – and urge Iran to release Pastor Saeed Abedini.

The 33-year-old U.S. citizen and father of two languishes in an Iranian prison merely because of his religious beliefs, suffering from internal bleeding.  Today, was the best opportunity we have had to date to raise his case.

Also today, the international effort to #SaveSaeed reached another tremendous milestone.  Over 600,000 people from all over the world have now signed the petition for his freedom at SaveSaeed.org.

After a week of productive meetings with foreign and U.S. diplomats concerning Pastor Saeed’s case, we expect to once again have an opportunity to raise his case before the U.N. on Monday.

Monday, I will once again return to the UN Human Rights Council to deliver remarks on the importance of protecting freedom of expression, once more highlighting Saeed Abedini’s illegal imprisonment by the Islamic Republic of Iran.

Naghmeh will also deliver remarks to the UN Human Rights Council about the importance of defending those, who like her husband Saeed, are persecuted for their faith. Naghmeh will urge UN member states to take more action on behalf of her husband.

For Monday’s presentation, individuals can watch the live stream of the 23rd Plenary Session of the Human Rights Council between the hours of 9:00a.m. and 5:00p.m. (GMT) at http://webtv.un.org.

The ACLJ and its European affiliate (The European Centre for Law & Justice) filed a written submission before the Human Rights Council.

The video of presentation:

My prepared remarks, as prepared, are posted here.  We will continue to keep you updated as the fight for this persecuted pastor’s life continues. 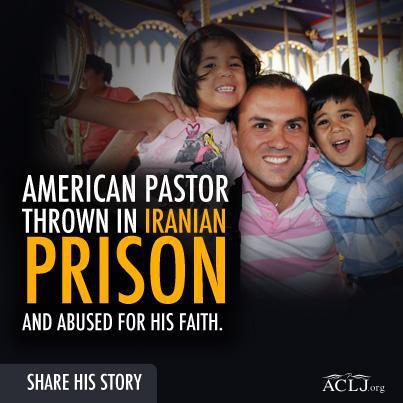